Students and practitioners alike of geotechnical engineering have learned and used Boussinesq elastic solutions for stresses and deflections induced in a semi-infinite space by structures at the surface.  Although these solutions are very idealized and have many limitations, they’re still useful.

For the most part engineers have implemented these solutions–especially for loads other than point or line loads–using charts.  This chart, from Naval Facilities Engineering Command (1986)–DM 7.01, Soil Mechanics, shows the isobars for stresses induced by strip and square foundations.

In addition to being hard to read (a fault which has been fixed in many of the books that have cribbed this chart) it requires a great deal of interpolation to use it and many others.  In the past, the computational demands of using analytical solutions put them out of reach for practical use and educational purposes.  That’s no longer the case; however, some of those solutions are difficult to find.  This piece attempts to bridge that cap and set forth analytical solutions that can be used, along with a spreadsheet to implement at least some of them.

Assumptions of the Solutions Presented

The simplest case for this set of foundation geometries is the strip load, which reduces a three-dimensional problem to a two-dimensional one.  The problem is illustrated (and a point under consideration located) in the figure below, taken from Verruijt, A., and van Bars, S. (2007). Soil Mechanics. VSSD, Delft, the Netherlands..

is the uniform pressure on the foundation in load per unit area, and the two angles from the two corners define the location of the point in question.  Probably the mathematically simplest representation is also found in Verruijt, as follows:

Verruijt notes that the area of greatest interest is directly under the centre of the foundation, where for any point

.  In this case the equation reduces to

At the base of the foundation,

, as we would expect.

The tricky part of this is in determining the two angles from the geometry of the system and the desired location of the point in question.  For students probably the simplest way of doing this is to use CAD software.  However, the formula for the stress under the foundation centre can also be written in a more convenient form.  If

is the total width of the foundation and

Stresses under Square and Rectangular Loads

These are well known, and most engineers and engineering students have used the “Fadum charts” as shown below to obtain the solution.

Both the strength and the weakness of the charts is that the stresses computed are under the corner of the rectangle/square.  It is a very specific position, but by using superposition (permissible with elastic, path-independent solutions) we can add and subtract rectangles to obtain the stress at just about any point under or near the structure in question.

There are many expressions of the equations that generated these charts; the following is derived from Bowles (1996).  We will use the notation shown above.  If

We used the Rectangular Elastic Solutions Spreadsheet to generate our own version of the Fadum chart, shown below.  The spreadsheet also includes the numerical values which were used to plot the results, which could save some uncertainty in interpolating the results. 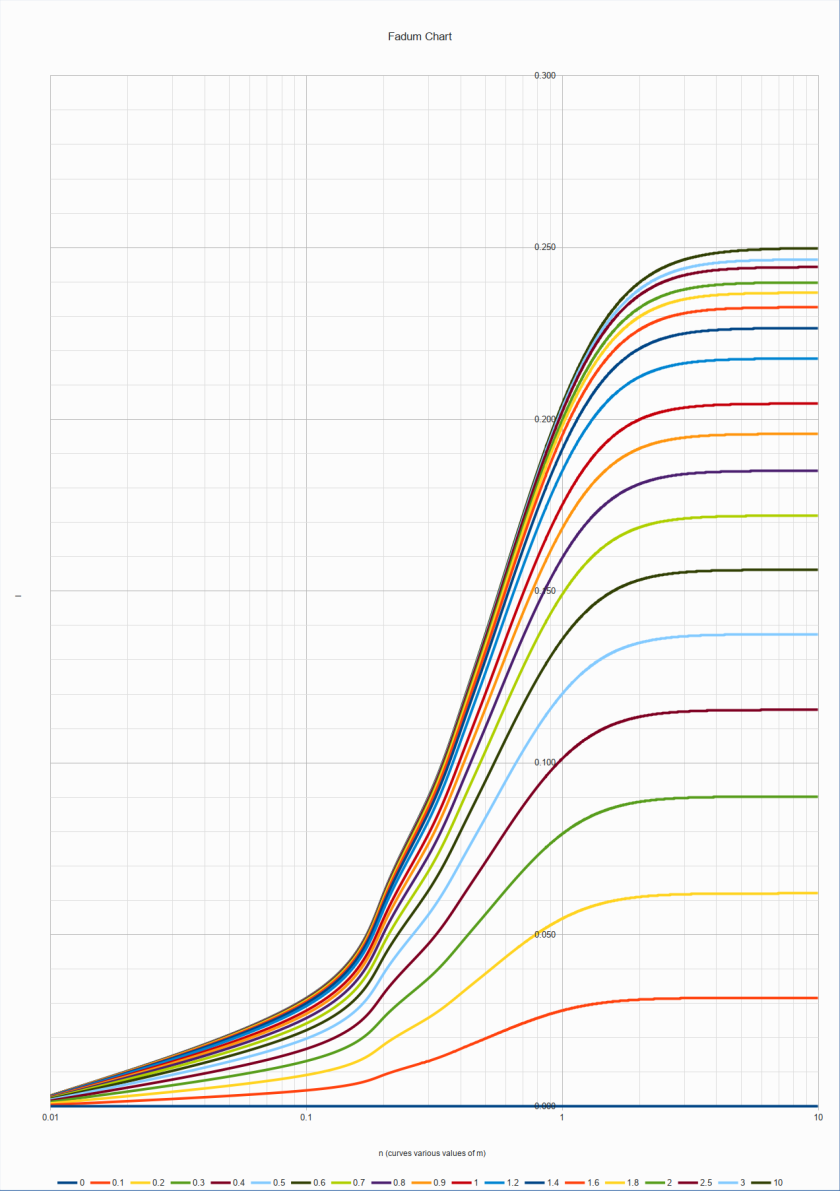 The Rectangular Elastic Solutions Spreadsheet also has an example of how superposition works with two rectangular foundations with two different loads and a point away from both.  It is taken from Verruijt, A., and van Bars, S. (2007). Soil Mechanics. VSSD, Delft, the Netherlands., who solve the problem using Newmark’s Method.  The diagram for the problem is shown at the right.  The superposition method is illustrated below.  Using the formulae the superposition method is more precise than using the charts, which makes it a more interesting alternative to the Newmark charts in cases such as this.

Deflections of Squares and Rectangles

Elastic solutions can be used to predict both stresses and deflections.  Most engineers are familiar with tables such as this, and these are still used for initial deflections and deflections in media such as intermediate geomaterials (IGMs.) 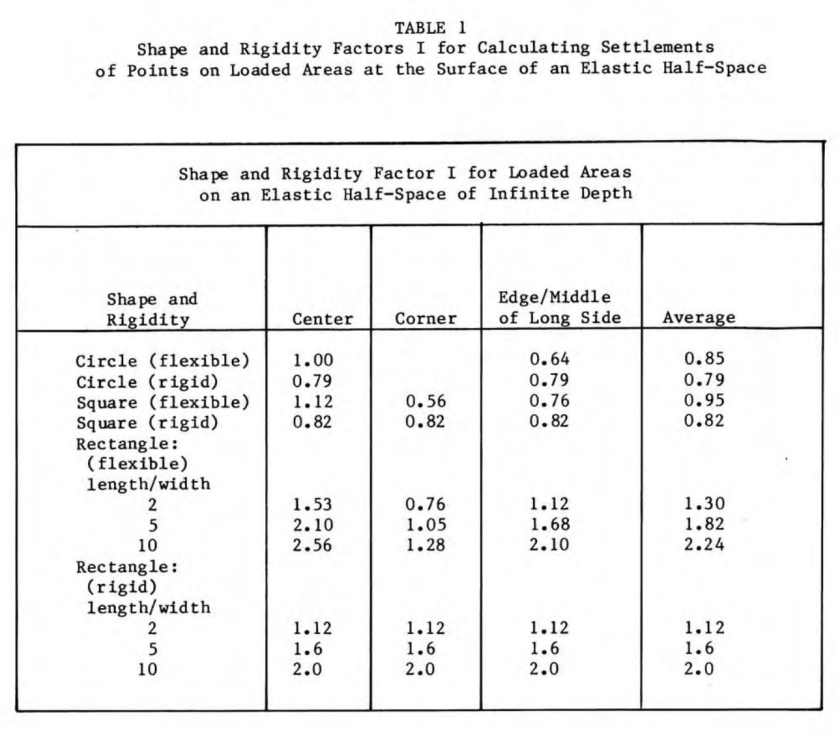 So how does one compute these values? Let’s start by using the same coordinate system as is used with the Fadum chart above, only putting the origin at the centre of the foundation.  In this way the long edges have the coordinates x = +-B/2 and the short edges y = +- L/2, and the corners the four combinations of the two.  The center is obviously x =y = 0.  First, the deflection at any point on the surface of the foundation can be computed by the equation

is the deflection at a given point, q is the uniform load on the foundation (the same as p above,) B is the short length of the foundation, 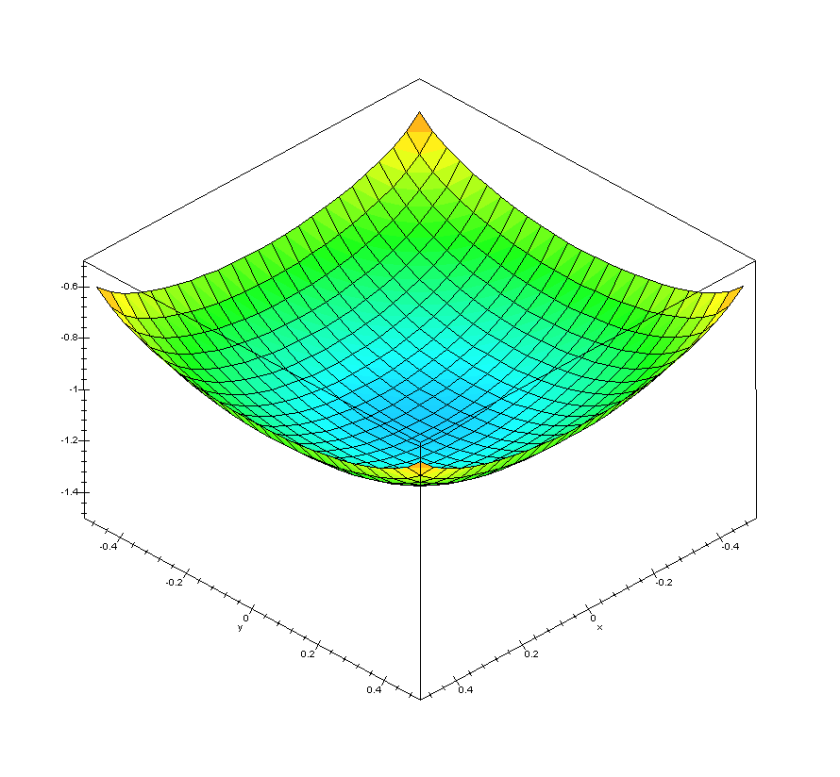 It is easy to see what is meant by “flexible” foundation.

The problem with this formula is that, if blindly followed mathematically (just inserting the variables) singularities quickly arise both along the edges or at the corners.  Symbolically solving (and taking a few limits) get around this.  For the mid-point of the edges,

And at the corners,

A plot of the same functions mentioned in the table above from the formulae is below.

The center deflection can be found by either substituting x=0, y=0 into the first equation or by using the equation

Use of theory of elasticity in this way has been employed in foundation design for a long time, even with the inherent limitations of the method.  It gives reasonable approximations for either initial deflections or for deflections of IGM’s.  For implementation on a recurring basis, use of the formulas allows a more precise implementation of these methods is not necessarily a more accurate one, and eliminates the errors inherent in reading charts.

In our opinion it is possible to improve the accuracy of the method by improving our understanding of the elastic modulus of the soil, and in particular strain-softening near the foundation itself.

The deflections are probably the less satisfactory products of this theory than the stresses.  No foundation is either purely flexible or rigid, and using a purely flexible foundation produces larger variations in deflections than one would expect in reality.  Also, the typical rule of thumb that foundations with an aspect ratio larger than 10 can be treated as continuous/infinite foundations is reasonable for stresses but not for deflections, and in fact the DM 7 chart shown above was truncated from its source.  Whether this is reflected in reality is another question, and this too doubtless relates to the flexibility of the foundation.