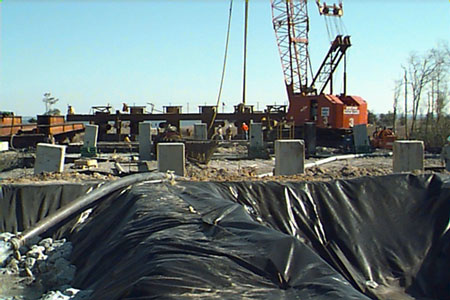 This document is the reference manual for NHI training course No. 132083, both
developed to assist State Departments of Transportation (DOTs) in the successful development of LRFD Design Guidance for bridge foundations based on the 2010 AASHTO LRFD Bridge Design Specifications and their local experiences. Initially, an LRFD Implementation Plan of six consecutive steps is discussed and the remainder of the manual presents recommendations to assist DOTS with implementation of these steps. The principal changes in the AASHTO design specifications from ASD to LRFD are presented. The DOTs have three options for selection of LRFD geotechnical design methods: adoption of AASHTO’s LRFD methods or development of local LRFD methods by fitting to ASD or through reliability analysis of information collected at load test sites. The calibration methods and conditions for these three options are discussed to assist DOTs in implementation of these options. Procedures are furnished to evaluate and address the project site variability. Then, the three implementation options are evaluated and compared to assist DOTs with selection of the most appropriate option. The advantages of development of local reliability-based LRFD design methods over other implementation options are demonstrated. The implementation of AASHTO LRFD for geotechnical design for bridge foundations will lead to savings or to equivalent foundation costs compared with ASD methods. At the end, a roadmap for development of LRFD design guidance that consists of LRFD design specifications and delivery processes for bridge foundations is discussed. 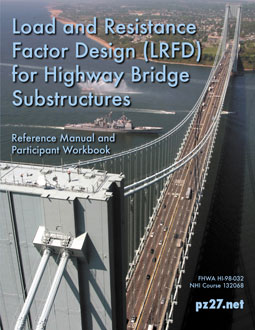 For many years, engineers have designed foundations, walls and culverts for highway and other applications using allowable stress design (ASD) methods. In ASD, all uncertainty in loads and material resistance is combined in a factor of safety or allowable stress. For most highway design, the American Association of State Highway and Transportation Officials (AASHTO) Standard Specifications for Highway Bridges represents the primary source document for ASD of substructures. In 1994, AASHTO approved Load and Resistance Factor Design (LRFD) in the LRFD Highway Bridge Design Specifications. In LRFD, the uncertainty in load is represented by a load factor and the uncertainty in material resistance is represented by a resistance factor.

Due to the fundamental differences between the substructure design process by ASD and LRFD, this course has been developed to present the fundamentals of LRFD for the geotechnical design of highway bridge substructures. Because this document was prepared for engineers and others who are already familiar with the design of substructures using ASD, it is intended for use in conjunction with other documents describing standard geotechnical design procedures. The objectives of this reference manual are to provide the basis for an understanding of the:

This report summarizes the findings and recommendations on the impact of foundation settlements on the reliability of bridge superstructures. As a collaborative effort of an overall initiative for the development of LRFD foundation design specifications, this study is focused on the investigation of pros and cons for including foundation settlements in bridge designs under gravity loads. Settlement was modelled both probabilistically and deterministically. In the case of a random settlement variable, a log-normal distribution was used in reliability analysis with a fixed coefficient of variation of 0.25. Dead and live loads were modelled as random variables with normal and Gumbel Type I distributions, respectively. Considering the regional traffic condition on Missouri roadways, the effect of a live load reduction factor on bridge reliability was also investigated. Therefore, a total of eight cases were discussed with a complete combination of settlement modelling (mean and extreme values), design consideration (settlements included and excluded), and live load reduction (unreduced and reduced live loads). Based on extensive simulations on multi-span bridges, bridges designed without due consideration on settlements can tolerate an extreme settlement of L/3500 – L/450 under unreduced live loads and up to L/3500 under reduced live loads without resulting in a reliability index below 3.5 (L=span length). Depending upon span lengths and their ratio, the reliability of existing steel-girder bridges is consistently higher than prestressed concrete and solid slab bridges. The shorter and stiffer the spans, the more significant the settlement’s effect on the reliability of bridge superstructures. As the span length ratio becomes less than 0.75, the girder and solid slab bridges’ reliability drops significantly at small settlements. A concrete diaphragm is very susceptible to the differential settlement of bridges, particularly for moment effects. Two recommended were made to address settlement effects in bridge design:

The first method provides a direct approach to deal with settlements and has potential to reduce overall costs in bridge design. The second method may result in oversized foundations.

This implementation report presents an expanded database for calibration of the SE load factor for foundation movements in the AASHTO LRFD Bridge Design Specifications. The expanded database includes information from several state Departments of Transportation as well as other sources. Statistics are presented based on data from each source. Recommended values of SE load factors are developed. The effect of local geology and subsurface investigation techniques on the predicted values of SE load factors is discussed. This report will also serve as a useful reference for future researchers as well as agencies desiring to develop SE load factors based on local methods that are better suited to their regional geologies and subsurface investigation techniques.

This manual serves as a reference manual for use with the 5-day NHI training course 130094 “LRFD Seismic Analysis and Design of Transportation Geotechnical Features and Structural Foundations.” Additionally it replaces the previous version of Geotechnical Engineering Circular No.3 “Design Guidance: Geotechnical Earthquake Engineering for Highways” published in May 1997. This manual is intended to provide a technical resource for bridge and geotechnical engineers responsible for seismic analysis and design of transportation geotechnical features and structures such as soil and rock slopes, earth embankments, retaining structures and buried structures; and structural foundations including shallow and deep foundations and abutments. Topics include earthquake fundamentals and engineering seismology, seismic hazard analysis, ground motion characterization, site characterization, site-specific seismic site response analysis, geotechnical hazards including liquefaction, slope instability, and seismic settlement, and soil-foundation-structure interaction are included. This manual also addresses LRFD analysis and design requirements and recommendations of the seismic provisions in AASHTO LRFD Bridge Design Specifications, AASHTO Guide Specifications for LRFD Seismic Bridge Design, and the NCHRP Report 611 from NCHRP Project 12-70 “Seismic Analysis and Design of Retaining Walls, Buried Structures, Slopes, and Embankments.”