In his recent, excellent article on the settlement (and subsidence) of the San Jacinto Monument east of Houston, Briaud (2018) takes an opportunity to vent a “pet peeve” of his relative to the way consolidation tests are reduced and consolidation properties reported:

The consolidation e versus log p’ curve is a stress-strain curve.  Typically, stress-strain curves are plotted as stress on the vertical axis and strain on the horizontal axis.  Both axes are on normal scales, not log scales.  It’s my view that consolidation curves should be plotted in a similar fashion: effective vertical stresses on the vertical axis in arithmetic scale, and normal strain on the horizontal axis in arithmetic scale.  When doing so, the steel ring confining the test specimen influences the the measurements and skews the stiffness data.  Indeed the stress-strain curve, which usually has a downward curvature, has an upward curvature in such a plot. (p. 54)

Is this correct?  And is he the only one who thinks this way?  The two questions are neither the same nor linked.  Although this problem will certainly not be solved in one blog post, it deserves some investigation.

Statement of the Problem

Let’s start with a text we use often here: Verruijt, A., and van Bars, S. (2007). Soil Mechanics. VSSD, Delft, the Netherlands. Early in the presentation on the subject, he presents the following plot:

As Jean-Louis would have us do, the strain (or negative strain, since we’re dealing with compression) is on the abscissa, and the dimensionless stress is on the ordinate.  The difference between the two is that the stress is plotted logarithmically.  But it’s a step.  We’ll come back to that later.

Verruijt defines the relationship between the strain and stress ratio as follows:

This relationship goes back to Terzaghi’s original tests and formulation of settlement and consolidation theory almost a century ago.

From a “conventional” standpoint there are two things wrong with this formulation.  The first is that it is based on strain, not void ratio.  The second is that it uses the natural logarithm rather than the common one.  The last problem can be fixed by rewriting it as follows:

This formulation is essentially the same as is used in Hough’s Method for cohesionless soils, once the strains are converted to displacements by considering the thickness of the layer.  So it is not as strange as it looks.

The first problem can be “fixed” by noting the following:

We can substitute this into the equation before it and, with judicious changes of the constants and other subsitutions, come up with the familiar, non-preconsolidated formula for consolidation settlement, or

When we reverse the axes, we then get the “classic” plot as follows:

But is there a problem with using strain?  Verruijt explains the two conventions as follows:

In many countries, such as the Scandinavian countries and the USA, the results of a confined compression test are often described in a slightly different form, using the void ratio e to express the deformation, rather than the strain ε…It is of course unfortunate that different coefficients are being used to describe the same phenomenon. This can only be explained by the historical developments in different parts of the world. It is especially inconvenient that in both formulas the constant is denoted by the character C, but in one form it appears in the numerator, and in the other one in the denominator. A large value for

corresponds to a small value for

. It can be expected that the compression index

will prevail in the future, as this has been standardized by ISO, the International Organization.

As is often the case, the simplest way to help sort out this issue is with an example.  Briaud (2018) actually has one, but we will use another.

An example we have used frequently in our teaching of Soil Mechanics is this one, from the Bearing Capacity and Settlement publication.  It is a little more complex than the theory shown above because it involves a preconsolidated soil.  The plot (with the simplifications for determination of 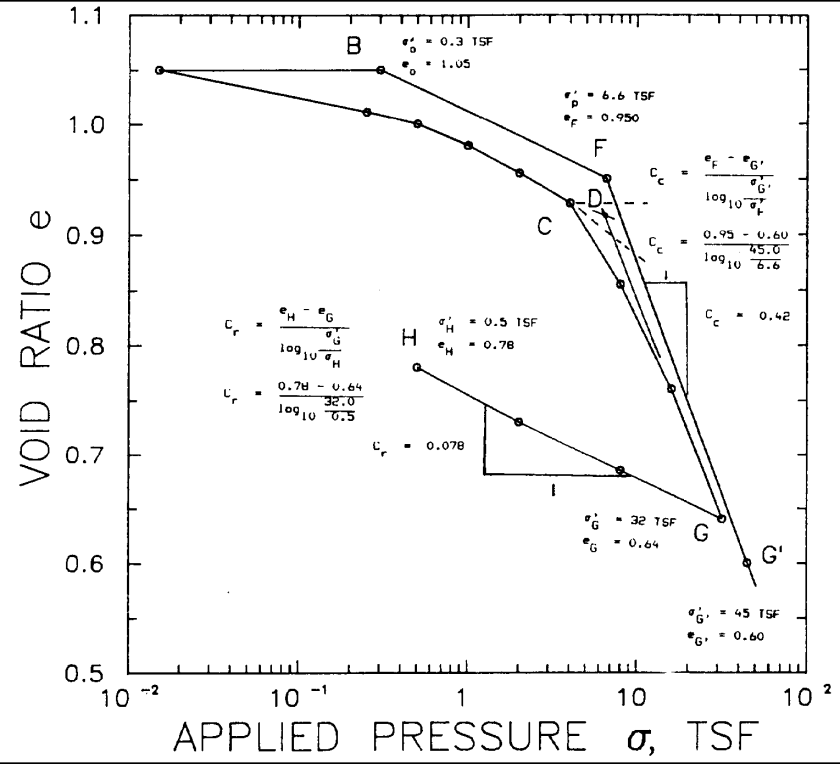 With this information in hand, we process the data as follows:

First, the strain-dimensionless stress plot, using natural scales for both.

The result is similar to that in Briaud (2018).  The compression portion best fits a second-order polynomial fit.  (Not that we have thrown out the zero point to allow more fit options.)  The decompression portion fits an exponential trend line best.

Below is the same plot with the stress scale now being logarithmic. 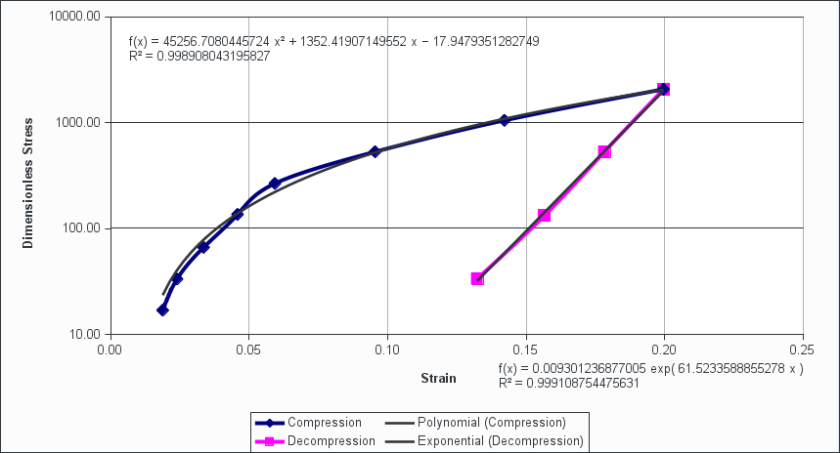 This is basically the original graph with the axes reversed.  There is no effect using strain; we will discuss the advantages of doing so below.

Now let us look at the data from another angle: the tangent “modulus of elasticity,” defined of course by

We consider natural scales for both modulus and strain.  To obtain the slope, we used a “central difference” technique except at the ends.

It’s interesting to note that, except for the “kink” caused by preconsolidation, in compression the tangent modulus of elasticity increases somewhat linearly with strain, as it does with the decompression.

Discussion of the Results

There’s a great deal to consider here, and we’ll try to break it down as best as possible.

Use of Strain vs. Void Ratio

The graphs above show that there is no penalty in using strain instead of void ratio to plot the results.  The advantage to doing so is both conceptual and pedagogical.

In the compression and settlement of soils, we traditionally conceive of it as a three-stage process: elastic settlement, primary consolidation settlement, and secondary consolidation settlement.  Consolidation settlement is nothing more than the rearrangement of particles under load; the time it takes to do so is based in part on the permeability of the soil and its ability to expel pore water trapped in shrinking voids.  Elastic settlement is due to the elastic modulus of the material, the strain induced in the material and the geometry of the system.  This distinction, however, obscures the fact that we are dealing with one soil system and one settlement.  Using strain for all types of settlement would both help unify the problem conceptually and ease the transition to numerical methods such as finite element analysis, where strain is used to estimate deflection.  In the past we were able to use a disparate approach without difficulty, but that option is not as viable now as before.

The Natural Scale, Consolidation Settlement Stiffness, and the Ring

Both here and in Briaud (2018) the natural stress-strain curve experiences an upward curvature, which is obviously different from what we normally experience in theory of elasticity/plasticity.  This comes into better focus if we consider the variation of the tangent modulus of elasticity, which (except for the aforementioned preconsolidation effect) linearly increases with stress.  There are two possible explanations for this.

The first is to observe that, as soils compress in consolidation settlement, their particles come closer together, and thus more resistant to further packing.

The second, as suggested by Briaud (2018), is that the presence of the confining ring in the consolidation test augments the resistance of the particles to further compression.  The issue of confinement is an interesting one because in other tests (unconfined compression tests, triaxial tests) confinement is either very flexible or non-existent.  It should be observed that consolidation theory, as originally presented, is one-dimensional consolidation theory.  For true one-dimensional consolidation, we assume a semi-infinite case where the infinite boundary “confines” the physical phenomena.  The use of a confining ring assumes that the ring can replicate this type of confinement in the laboratory.  Conditions in the field, with finite loads and variations in the surrounding soils, may not reflect this.  While it would be difficult to replicate variations in confinement in the laboratory, these variations should be kept in mind by anyone using laboratory-generated consolidation data.

The “Modulus of Elasticity” for Consolidation Settlement

This may strike many geotechnical engineers (especially those in areas where void ratio is used to estimate consolidation settlement) as an odd concept, but if we consider the material strain vs. its deflection, it is a natural one.  Varying moduli of elasticity are nothing new in geotechnical engineering; they have been discussed on this site in detail.  The situation here is somewhat different for a wide variety of reasons, not the least of which is that here we are dealing with a tangent modulus while previously we looked at a secant one.  Also, differing physical phenomena are at work; theory of elasticity implicitly assumes that particle rearrangement is at a minimum, while consolidation settlement (both primary and secondary) is all about particle rearrangement.

A more unified approach to settlement would probably reveal a process where the change in stress vs. the change in strain varies at differing points in the process along a stress path with multiple irreversibilities.  Such an approach would require some significant conceptual changes in the way we look at settlement, but would hopefully result in more accurate results.

Consolidation settlement is a topic that has occupied geotechnical engineering for most of its modern history.  While the theory is considered well established, changes in computational methodology will eventually force changes in the way the theory is applied.  A good start of this process is to use strain (rather than void ratio) as the measure of the relative deflection of structures, and the example from Briaud (2018), along with the demonstration relative to natural scales, is an excellent start.