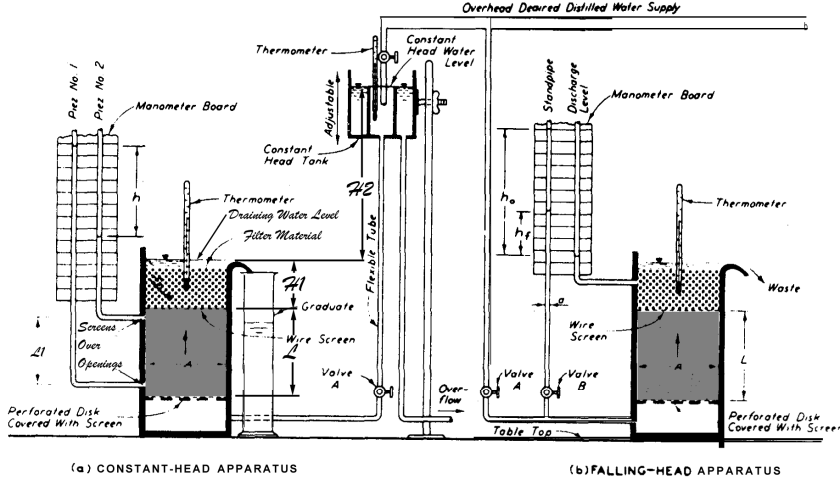 Water flow through soil–and the whole subject of permeability–is one of those topics that tends to mystify students in undergraduate soil mechanics courses.  This article will deal with one type of flow–flow that is purely vertical, downward or upward–and show how it is possible to compute the pore water pressure and effective stress in soils with vertical water flow.

We’ll start with the hydrostatic case, classic in the determination of effective stresses in many soil strata.  The pore water pressure is computed by the equation usually written in this way:

is the pore water pressure,

is the unit weight of the water, and

is the distance from the phreatic surface/water table, where by definition

is the change in the pore water pressure from some elevation 1 in the soil to some other elevation 2 in the soil, and

is the change in elevation from point 1 to point 2.  As a condition, since

is positive in the downward direction,

is likewise positive in the downward direction.

With flowing water, although the unit weight of the water is a constant, the effect it has on effective stress changes.  For this case we can expand the previous equation to read as follows (from Verruijt, A., and van Bars, S. (2007). Soil Mechanics. VSSD, Delft, the Netherlands.):

Note that we have added the hydraulic gradient into the mix, defined in the figure to the right.

This drawing shows a classic case of vertical, downward flow.  The coefficient of permeability

can be computed using methods described in Department of the Army (1986) — Laboratory Soils Testing for granular soils.  However, we can also use this test–or problems based on this test–to consider the effect of the flowing water on the effective stress, which in turn leads us to consider the topic of soil boiling when the flow is upward.  The best way to see how this works is to consider an example.

Consider the permeameter setup below.  We will concentrate on the constant head permeameter on the left.  The soil sample is in grey, with a length L and an area A.

Now consider an example with the following parameters:

Compute the effective stress at a point halfway between the upper and lower surfaces of the soil sample.

First, we compute the total stress at the top of the soil, thus

Because the total stress at this point is due to free water, the pore water pressure

On the lower surface of the soil sample, the total stress is

The pore water pressure, however, is due to the free water that begins in the constant head tank and ends at the bottom surface of the soil, thus

So how do we compute the effective stress at the midpoint in the soil sample?  Let us revisit the equation

And determine the pore water pressure at the midpoint.  We first want to compute the hydraulic gradient of the entire specimen, substituting yields

Solving for the hydraulic gradient yields

Now we substitute this result back into the equation, changing the distance

.  Keeping in mind that positive z is downwards, we start from the top of the soil sample.  The change in pore water pressure from the surface is

The effective stress is simply 33.4 – 31.85  = 1.55 kPa.  Since this is the middle of the layer, we would expect this stress to be the average of the effective stress at the top of the soil and the bottom, which in fact is the case.

which are the same answers without some of the computational effort.

which is in fact the case.