In our last post we considered some basic concepts behind beta methods for determining beta coefficients for estimating shaft friction for piles in sands.  The idea is that the unit friction along the surface of the pile can be determined at any point by the relationship

is the unit shaft friction,

is the vertical effective stress, and

is the ratio of the two, which can be further broken down as follows:

is the lateral earth pressure coefficient and

is the internal friction angle of the soil.  Our last post showed that, when compared with empirically determined values of

determined from more conventional retaining wall considerations are not adequate to describe the interaction between the shaft of the pile and the soil.

Needless to say, there has been a good deal of research to refine our understanding of this relationship.  Also, needless to say, there is more than one way to express this relationship.  The formulation we will use here is that of Randolph, Dolwin and Beck (1994) and Randolph (2003), and was recently featured in Han, Salgado, Prezzi and Zaheer (2016).  The basic form of the lateral earth pressure equation is as follows:

Let’s start on the right end of the equation; the exponential term is a way of representing the fact that the maximum shaft friction (with effective stress taken into account) is just above the pile toe and decays above that point to the surface of the soil.  This was first proposed by Edward Heerema (whose company was instrumental in the development of large steam and hydraulic impact hammers) in the early 1980’s.  (For another paper of his relating to the topic, click here.)

In any case the variables in the exponential term are as follows:

How do these two relate?  Although in the last post we produced extensive parametric studies on these, a simpler representation is to compare the active earth pressure coefficient with Jaky’s at-rest coefficient, which is done below. 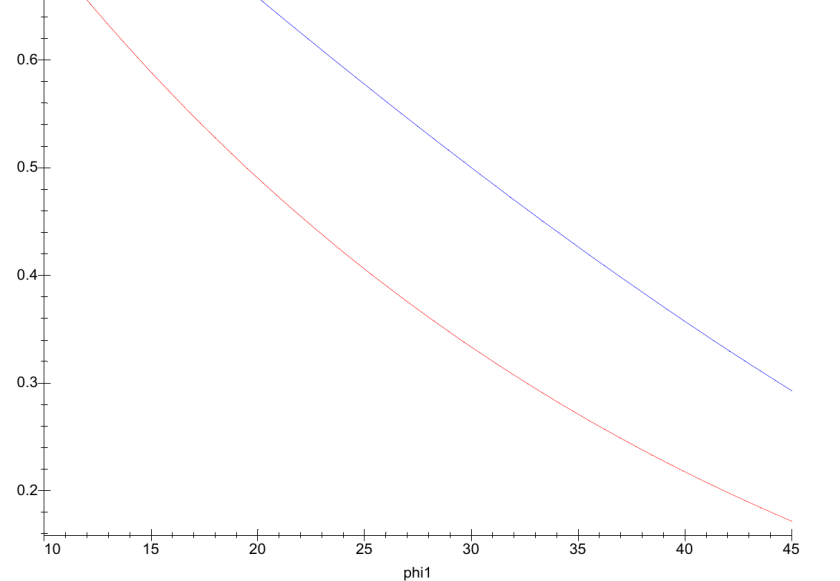 , which is a wide range for granular soils but reasonable.

depending upon whether the sand is loose (low end) or dense (high end.)

“is the ratio of the radial effective stress acting in the vicinity of the pile tip at shaft failure to the end-bearing capacity.”  Values for

vary somewhat but generally centre around 0.02.  This in turn implies that

.  Inspection of the complete equation for

and the exponential term is at its maximum,

cancels out and the range of

is a range for

Comparing this result to the graph above, for larger values of

are greater than those given by Jaky’s Equation, which is what we were looking for to start with.  To compute

, we obviously will need to multiply this by

.  By way of comparison, using Jaky’s Equation for

, which was useful for him (and will be useful to us) for some soils but creates problems with higher values of

Although some empirical methods indicate higher values for

, if we consider variations in

and other factors, this differential can be minimised, and in any case this is not a rigourous excercise but a qualitative one.

.  Randolph (2003) states that, when CPT data is available, it can be computed as follows for open-ended piles:

is the cone tip resistance.  Randolph (2003) recommends the coefficient be increased to 0.015 for closed-ended piles.  Making generalisations from this formulation is more difficult than the other, but the possibility of using this in conjunction with field data is attractive indeed.

At this point we have a reasonable method of computing

coefficients.  However, we still have the issue of clay soils to deal with, and this will be done in a subsequent post.

In addition to those previously given, we add the following: